Pages of a comic that never made print. Thought we'd share it across our various sites. Written by Lizzie Boyle, art & letters by yours truly. Enjoy. 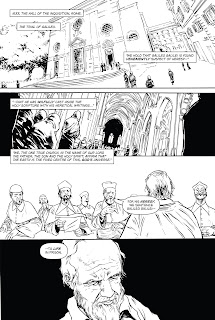 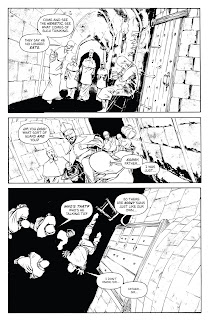 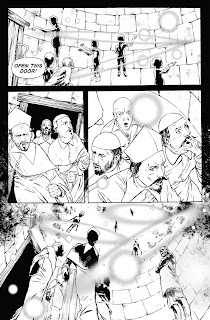 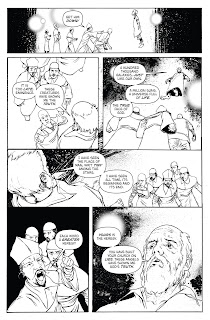 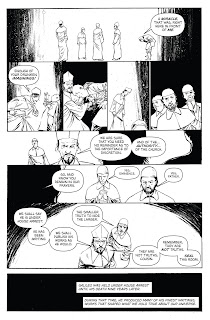 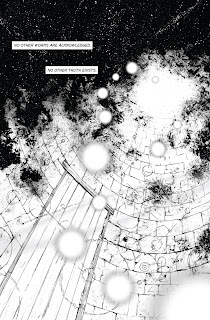 I have a few conventions coming up where I can show my work to editors/writers, so I'm tailoring some pages accordingly. First up, Penguin and some other guy with abandonment issues. This is part of a 5 pager featuring gothic sewers as I've been wanting to do something of that ilk for a while.

I'll post up the whole sequence when it's done. 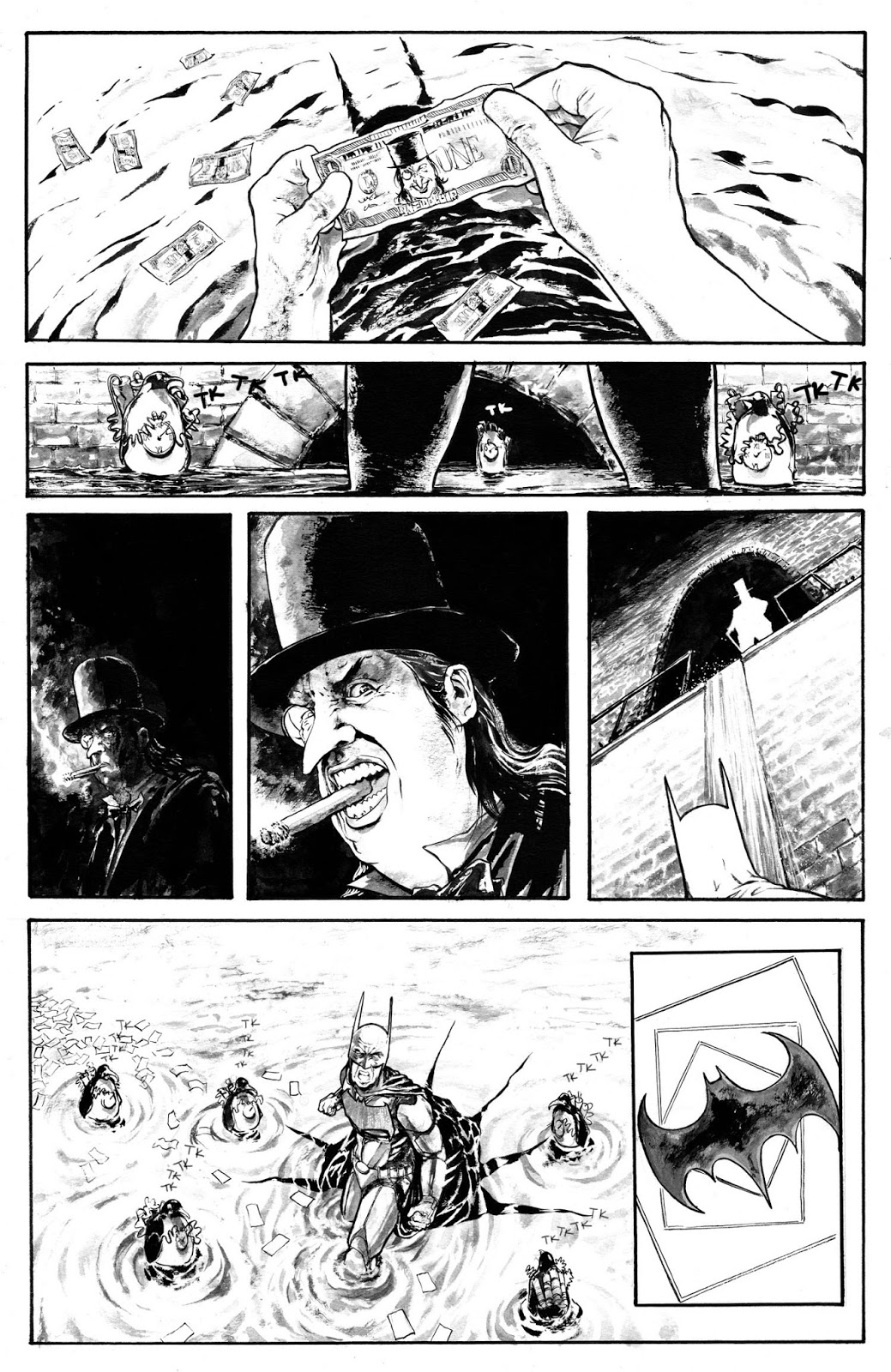 September sees the return of Comics Uncovered in Birmingham. A one day event aimed at comics creators with talks on technique, promotion and pitching to publishers. I attended the first of these events in 2011 when it was called Comics Launchpad, and made the following notes during an inking class held by Klaus Janson. I've since incorporated a lot of these methods and feel that my work has improved massively as a result, so hopefully this can be of use to others.

Whilst a lot of this is specific to traditional inking, a few of the pointers can also be applied digitally.
- -

Hold the brush straight down, not angled like a pencil. This allows greater movement in all directions.

Separate elements should be approached and inked separately. Don't ink grass the same way you would ink bricks/stone/wood.

Dip pen nibs come with a fine layer of grease, acquired during manufacture. Rub the grease off with a shave of an eraser. Then use a lighter or flame to light the nib (briefly!) to burn off any excess. The ink flow on the nib will greatly improve as a result.

An average brush lasts Klaus approximately 40 pages, though it can vary.

Use thinner ink for longer lines. Cheaper ink is thinner. Use the better quality thicker ink for larger areas/spot blacks. (I've since used this as a rule, it works a charm. The thinner (cheaper) ink can last so much longer when doing lots of linework; using the good stuff (Windsor & Newton in my case) tends to mean more time spent washing brushes and less time inking.

Before working, swirl the brush in water to make a finer point.

Always keep the ink bottle full, don't go searching for it. Higher levels of tar in ink kills brushes faster. Once the brush is dead, it's dead.

A thick line butting against a thin creates the element of one object being behind another.

Lock your wrist whilst applying lines, use your forearm instead. (Oh man, this single trick alone has proven priceless for me. Straight lines, long curves, everything becomes more controlled, though it does take a bit of practice and you need to teach your brain that it's a good idea - well, I did anyway!)

On the subject of straight lines, another trick I've picked up on my travels (via PJ Holden) is to use a ruler with a brush. Put the ruler edge on the page (at roughly 45 degrees, or high enough to get your fingers underneath it) and run the stem of the brush along the other edge. Your inking hand can sit on the ruler. 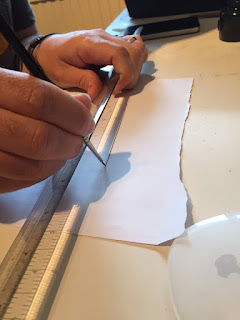 This does require a fair bit of practice, but combined with the 'Lock your wrist' technique, gives you lines that have a bit more life to them  (as opposed to fineliners drawn with normal use of a ruler, which can leave your work looking a bit flat) and you can vary the line width as you go. Varying the line weight is great for brickwork, stone or surfaces with damaged edges. I've also found that by tilting the ruler, you can ink a lot of parallel lines without having to move and reset yourself - useful for speed lines, door frames and distant buildings.
Posted by Conor at 12:11 2 comments:

This was inspired by firstly by Raygun Roads, possibly the most bonkers comic you're ever likely to read (took me two attempts, the first of which gave me a headache) and secondly by a great little bar in Clapham Junction called Project Orange, which, if you're ever in the vicinity is well worth checking out. The imagery is borrowed heavily from the latter's brightly painted walls, just my own take on it. Full credit to the artist involved, though I don't know the name. 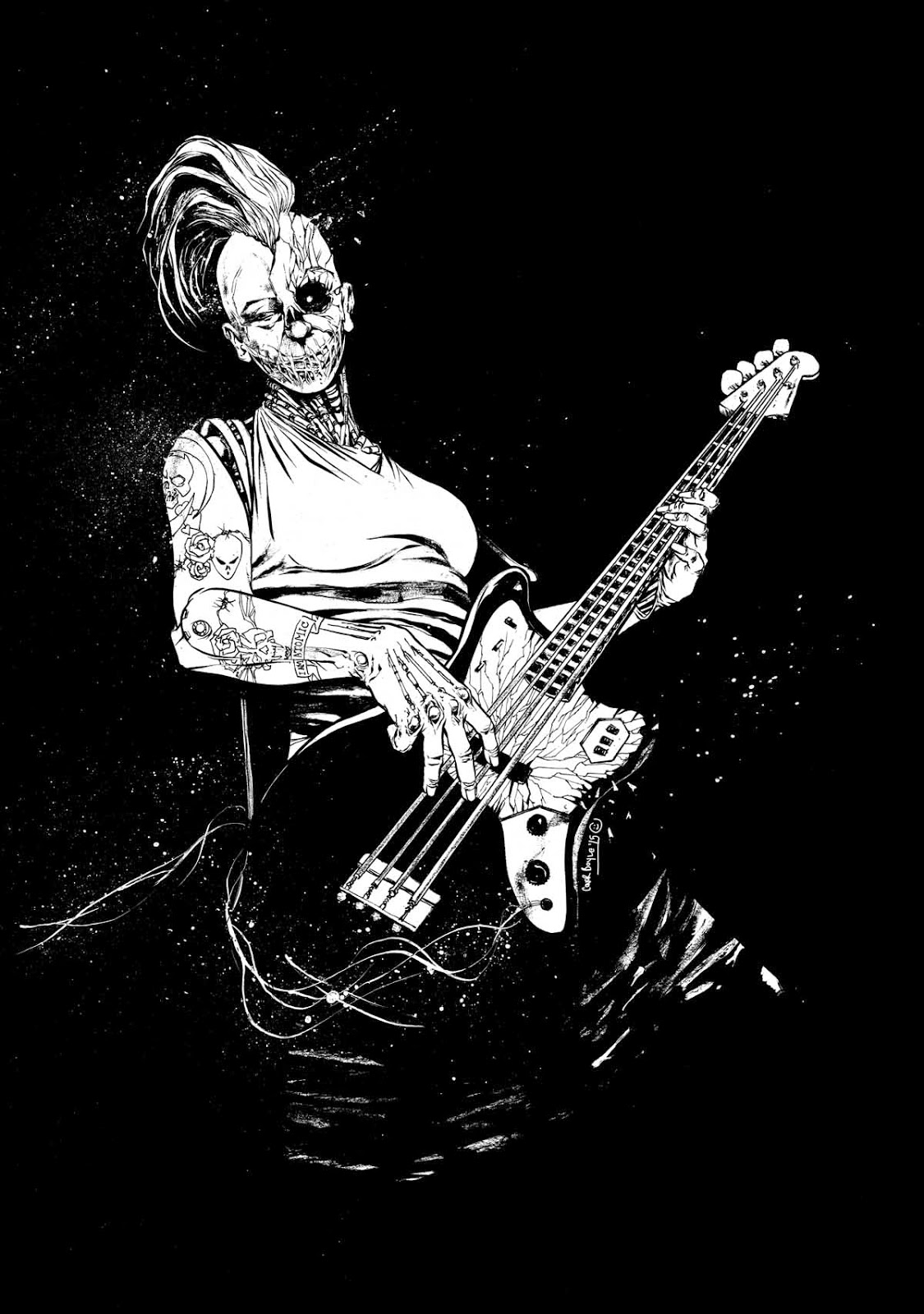 
Anyone who has been anywhere near the X Files knows the Cigarette Smoking Man. The culmination of a million shadowy figures from the big screen, stretching all the way back to All The Presidents Men, and beyond, into a thousand Black & White mystery movies.

We're currently doing the whole 9 series X Files re-watch. It takes forever to get through, and we keep forgetting some of the minor characters, but with 'CSM' as he's apparently known, that doesn't matter. Because no one knows anything about him to begin with. 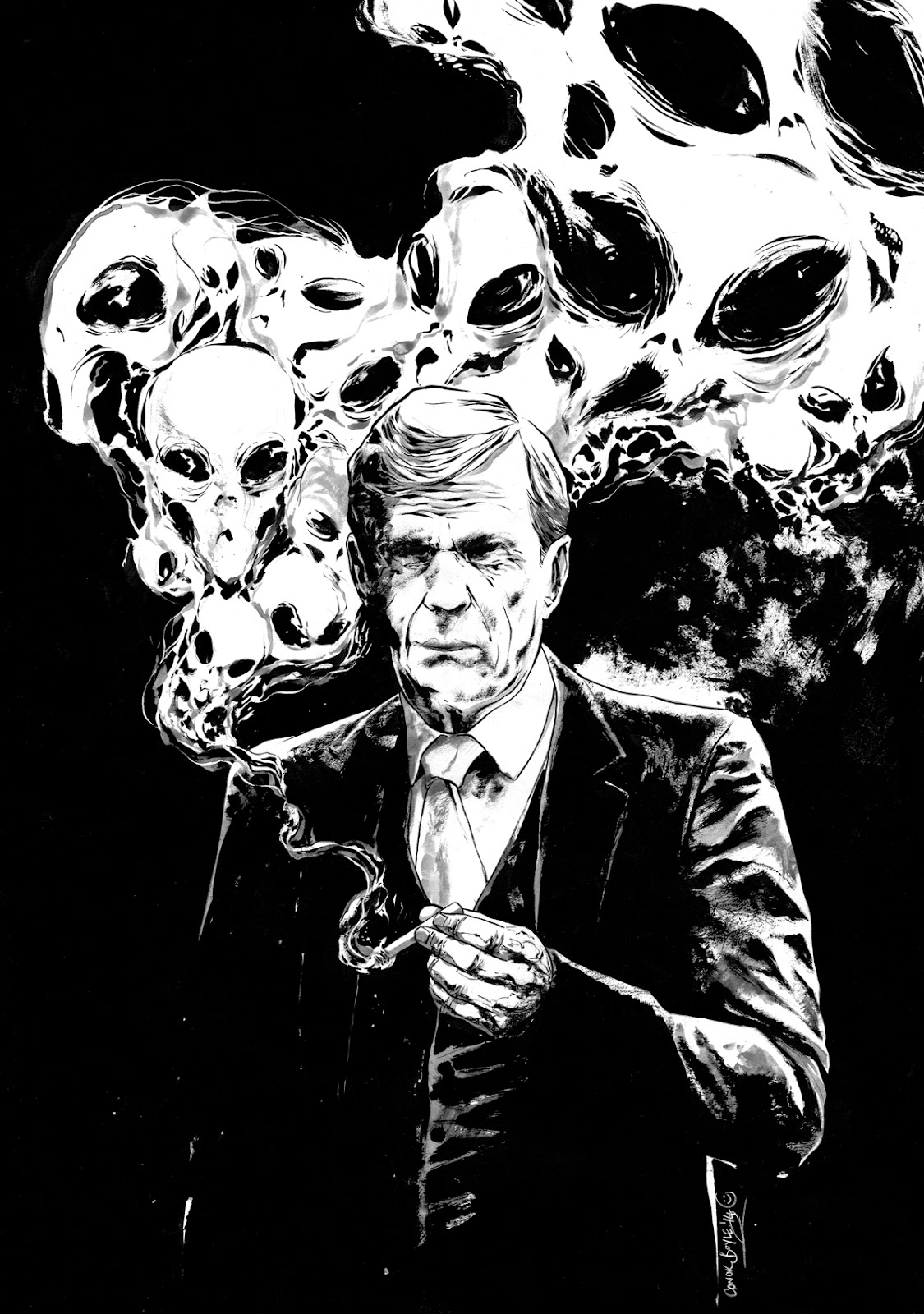 
From the pages of 2000AD, and probably my favourite series. Nemesis The Warlock pitted aliens against humans with the humans as the bad guys, and Thomas de Torquemada as chief loon, pushing an earth-wide party line of fear, hate, and extreme xenophobia. (Oh how we laughed back then...)

Anyway, the art begun by Kevin O'Neill, then Bryan Talbot and carried on by others - John Hicklenton in particular - blew my teenage mind.

Most of these pieces are to push me out of my comfort zone with various art materials and techniques. This is simply a fanboy pic. 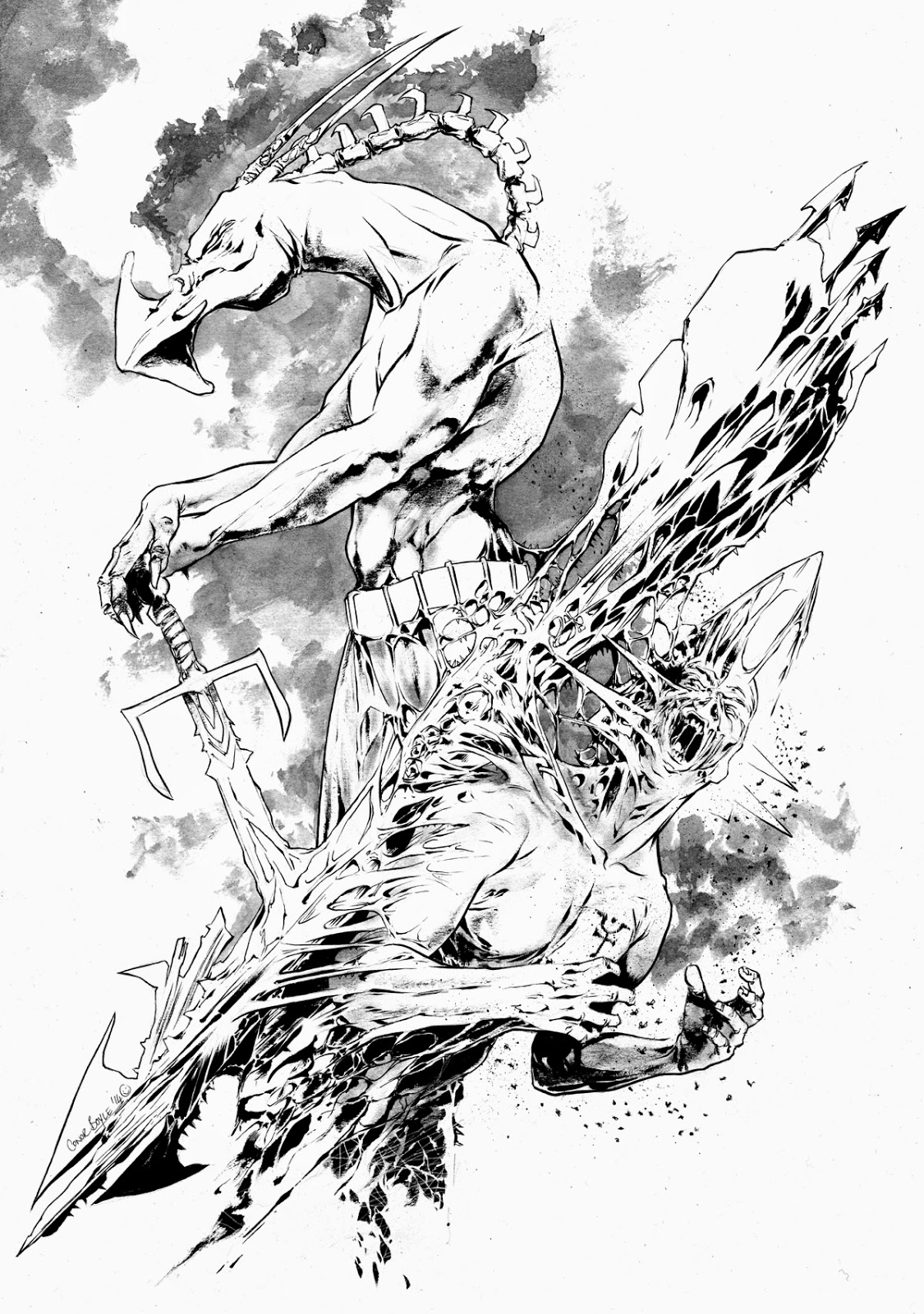 Possibly the most specific one of the set. If you know who this guy is, it means you grew up in 1970s England, watching some really odd kids tv programs, one of which was Jigsaw. In this, aside from puzzle solving games and sketches, was Noseybonk, the most odd character I'd seen, who didn't seem to fit the show at all. It was like the producers had just sparked up a joint and gone "*ffffppptttt* -- Hey, y'know what would really make sense...?"

Anway, I recently found these wee gems on youtube, (there's a few following on from that link) made by folks who also drifted back to those days, and thought "What the hell was Noseybonk meant to be, anyway?"

Which in turn inspired this piece. Which was just fun. Ink, pencils and charcoal. 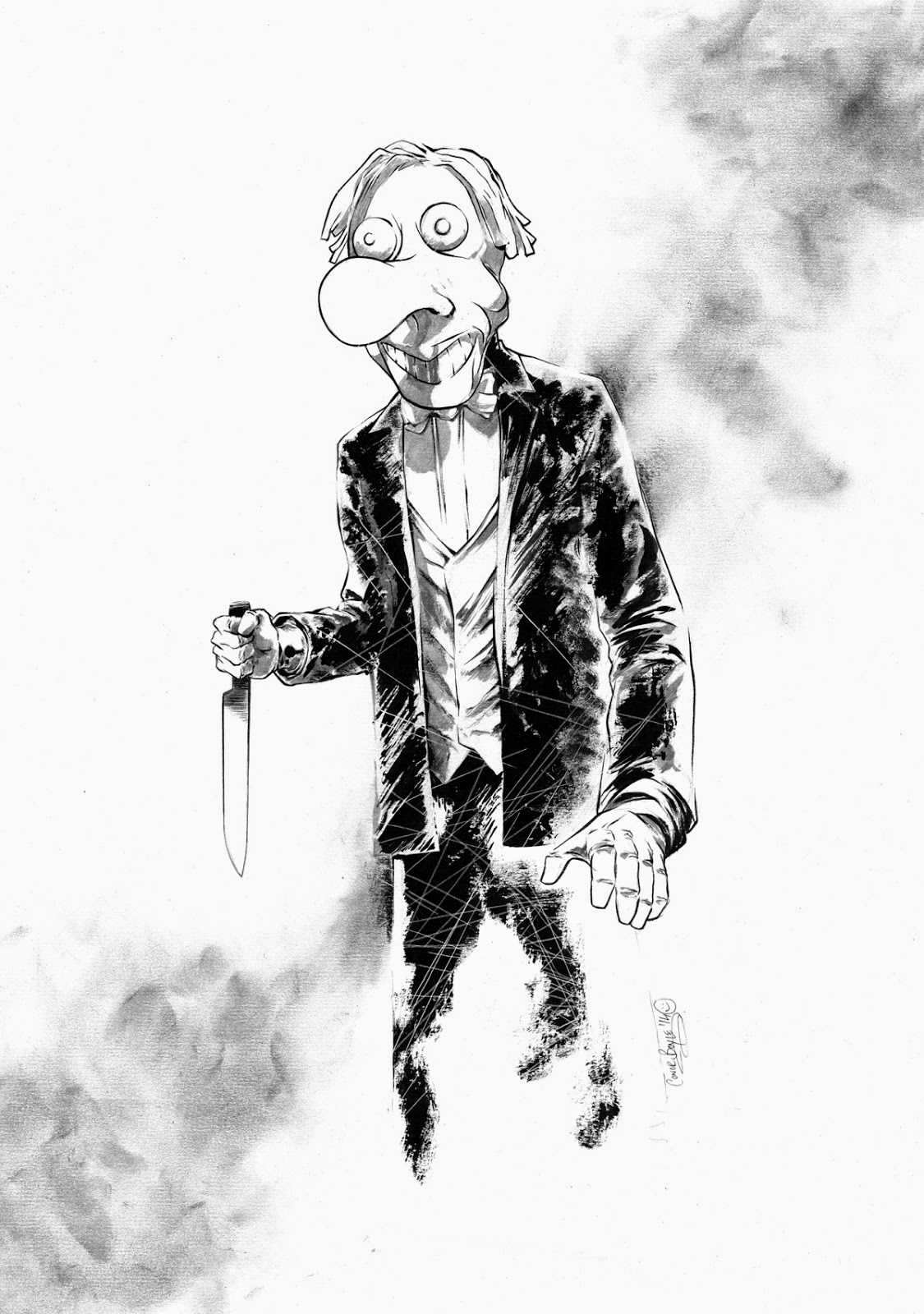